Paisley has had its struggles. The town centre has been hit hard in recent decades, firstly by the decline of the town’s industrial base since the 1970s and then the massive expansion of out-of-town shopping at Braehead and Silverburn, as well as the success of Glasgow city centre. But prepare to be surprised… 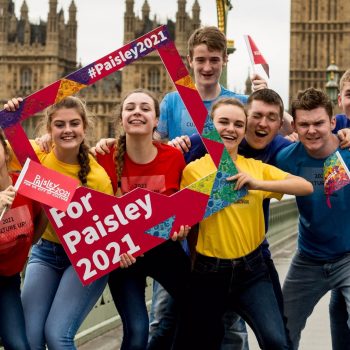 With a heritage of Stewart kings and radical poets, medieval patriots and exiled punks, Paisley has lots of stories to tell – and a town centre to match, from the medieval abbey and Victorian splendour to its modern university. Major investments are capitalising on its location as arguably Scotland’s best connected town, just 15 minutes from Glasgow city centre by road or rail and with Glasgow airport on the edge of town.

So, local folk weren’t surprised when Paisley was shortlisted for UK City of Culture 2021 - the first town in the UK to receive the honour. Ultimately Paisley was pipped to the post by Coventry, a much bigger city. But that didn’t stop Paisley making the most of the bid process to raise its ambitions, bring people together and invest in the future – as retold in this press article. In fact, it was all part of a bigger plan mapped out in 2014 with Paisley: The Untold Story – an ambitious and exciting strategy to transform Paisley’s future using its internationally significant heritage and cultural assets.

A once-in-a-generation transformation of Paisley town centre is already under way. Renfrewshire Council is investing over £100m in the town centre on:

These changes are captured in an inspirational 2030 vision for the town centre which shows how Paisley can be redesigned to re-energise the high street. The vision maps out how the town centre will be transformed over the next decade.

The lessons from the Paisley visioning work were used to prepare this guide for other Scottish towns who are interested in preparing a future vision to guide planning, action and investment.

The council may be taking a leading role in Paisley's transformation, but it knows it doesn’t have the power or resources to do everything. Much more impact can be achieved by helping everyone’s projects and initiatives to materialise. So a crucial part of the council’s role has been to support everyone involved in the town centre to work together, from the local youth theatre to the chamber of commerce.

Collaboration helps individual projects come to fruition - like Paisley Community Trust’s £12m proposal for a community-owned cinema on the high street, not out of town, to reconnect socially isolated individuals of all ages, circumstances and abilities, making cinema accessible for all. It is designated as Project One in the 2030 town centre vision.

Collaboration also helps the growing cultural programme of festivals, events and activities to happen, such as Paisley Halloween Festival, The Spree Festival, Paisley Book Festival, artist residencies in communities and partnerships with organisations including Renfrewshire Leisure, National Theatre of Scotland, Tron Theatre and Creative Scotland. You can see this all and more at Paisley.is - the destination brand and website highlighting Paisley and Renfrewshire as a great place to live, work and visit.

Paisley may have had its struggles, but now the town is leading the way in showing what collaboration, commitment and a strategic approach can achieve.