A common message from artists and creative people involved in town centre regeneration is "be authentic". Use what you’ve got. Build on local interest, activities and assets. Base around local people and circumstances, so the whole town embraces what you’re doing. Start with community engagement and grow from that.

You can see these principles being put into action by The Stove in Dumfries and the examples below.

Want to find more about ‘themed towns’? For ideas, information and examples check out What’s your theme? 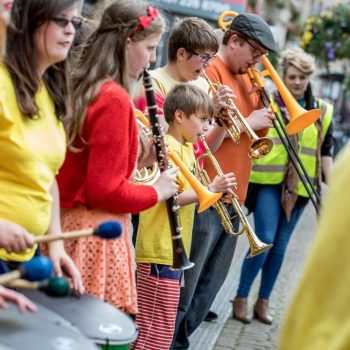 From an intended one-off event to celebrate the 300th year of Portsoy’s harbour in 1993, the annual Scottish Traditional Boat Festival was born. Packed with brilliant moments, the Scottish Traditional Boat Festival brings together boats, music, crafts, food and drink to celebrate the region’s rich cultural heritage. Up to 16,000 people descend on Portsoy over the Festival weekend each June, cheering on crews in competitive sailing on the open seas, dancing and listening to live music, tasting fresh local food, watching skilled traditional craftsmen and women at work, and much more.

But the Boat Festival is only part of the story. It has enabled the local community to:

All these projects are co-ordinated by Portsoy Community Enterprise, which also operates the Portsoy Links Caravan Park providing further visitor accommodation and income generation. The organisation as a whole seeks to provide economic benefit from tourism for the town of Portsoy and surrounding area. All of its assets belong to the community.

The closure of the Royal Air Force base in Kinloss in 2011, which had been in operation since the 1930s, was a big blow to the Moray economy. Partly in response, Findhorn Bay Arts was established in 2012 following a series of open meetings and discussions involving local artists and residents.

Based in Forres and Findhorn, Findhorn Bay Arts is a social enterprise and charity which is passionate about promoting this beautiful part of Scotland as a place for outstanding arts through the delivery of high quality arts events and projects.

Projects include the biennial Findhorn Bay Festival, the Culture Café and CashBack for Communities project In the Mix– all of which have a common aim of showcasing and nurturing the creativity of the area’s residents, whilst attracting high quality artists and productions to the area. During the first COVID-19 lockdown, a new popup shop called The Bakehouse was created on Forres High Street to sell local fruit, veg and bread with music and street art – a partnership between local growers, artists and musicians that created a real buzz. Other businesses welcomed the initiative as it has increased footfall and activity on the high street.

The organisation has a small dedicated team of staff and board members, backed up by volunteers, artists and residents. Funding is always tricky – especially the challenge of securing core funding – but responding to opportunities and working in partnership has enabled them to tap into project support from Creative Scotland’s Creative Place Awards, Highlands and Islands Enterprise and Moray Youth Arts Hub.